Lab 5: Getting Familiar with WeensyOS

In this lab, we will introduce you to kernel programming in WeensyOS. We will the give you a high-level overview of virtual memory, and walk you through “memory iterators”, which you’ll use in Project 3. Your tasks will involve modifying the WeensyOS kernel to start some processes on bootup, making those processes allocate memory on the heap, and then making a copy of the kernel memory mappings. This stencil will look very similar to the stencil you’ll use for Project 3.

You must run this assignment on a Linux machine, such as your course VM. Running on Mac, a Windows box without a VM, or on the department machine is unlikely to work!

This will merge our Lab 5 stencil code with your previous work. If you have any “conflicts” from Lab 4, resolve them before continuing further. Run git push to save your work back to your personal repository.

WeensyOS can, in principle, run on any computer with an x86-64 CPU architecture (like yours, most likely). For this lab, however, you will run the OS in QEMU, a CPU emulator. QEMU makes it possible to easily restart and debug WeensyOS, and you will use it in Project 3 as well.

Task: Run WeensyOS! To do so, run:


When running these commands, you may receive an error telling you to install a package called qemu-system-x86 in your course VM. If so, go ahead and install it using the command quoted in the error message (sudo apt-get -y install qemu-system-x86).

You should see a screen similar to the one below, which indicates that the WeensyOS kernel has booted on the computer simulated by QEMU. 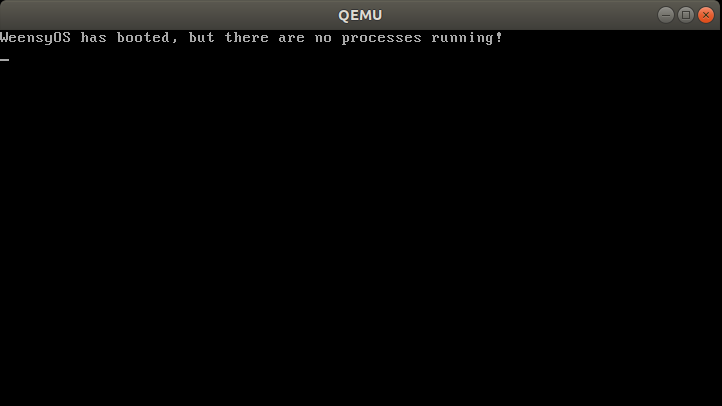 Nothing much is happening here! To exit, press Ctrl-C.

Now, let’s look at some code. Since WeensyOS is a complete operating system, the stencil code for this lab is quite large – but rest assured, you will only need to look at a few files for now.

Now let’s start some processes! Unlike the OS on your computer, the basic WeensyOS we’re using for this lab does not allow the user to specify what program they would like to run. Instead, it will run a fixed set of programs at bootup.

This function is responsible for setting up kernel state for a new userspace process: for example, it loads the program (via the program_loader, an ELF binary loader we’re providing you with). It then sets the instruction pointer and stack pointers, and finally marks the new process as runnable. Read through it now; you will need to understand and modify this function in Project 3.

Task: In the kernel function in kernel.cc, we’ll call process_setup to set up a new process:

Once you complete this step and run your WeesyOS, you should see a screen similar to the one below. 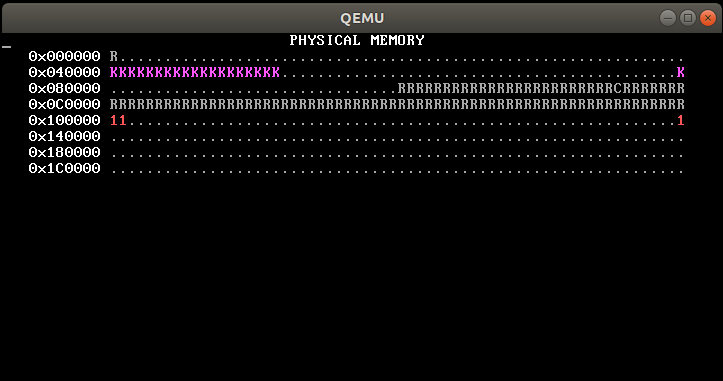 ! WeensyOS is displaying some helpful information to you here. Let’s look at what we’ve got. The output visualizes the contents of the machine’s physical memory (i.e., RAM).

The picture below explains the meaning of different characters. Your current WeensyOS will only have characters for the (red) process 1.

Looking more closely at the regions of memory that are in use here, the second picture explains what they’re for. You’ll see that each process has code and data pages, which the program loader puts in memory, and a stack (at the far end of its row), which process_setup put in place

Now that you understand the output, let’s have some more processes.

Task: Create three more processes in the kernel function. Use program_names "allocator2", "allocator3", and "allocator4" when you start them. This makes the program loader load the same compiled source code, p-allocator.cc, but into different regions of memory.

Note: you can leave the call to run(&ptable[1]) unmodified. It just asks the kernel to enter the kernel process scheduler and try to schedule process 1. If process 1 isn’t runnable or yields back, the kernel will automatically pick another process to run.

Once you’ve completed this step, you should see the following output on the screen.

It looks like the processes are running, but they’re not actively using any heap memory. The code for your processes is in p-allocator.cc:

This code runs in user space (i.e., outside the kernel). Right now, each process figures out where its heap and stack are, and then loops doing nothing. We can make the processes allocate some memory using the sys_page_alloc system call.

The signature and specification of sys_page_alloc is in u-lib.hh. Go and read it.

The implementation simply invokes make_syscall, which executes the inline assembly code in the same file. You don’t need to understand this code in detail, but note that it invokes the syscall x86-64 assembly instruction. This instruction transfers control into the kernel.

If you run WeensyOS after completing this change, you should see your four processes rapidly fill up the memory from left to right, with the end result shown below. 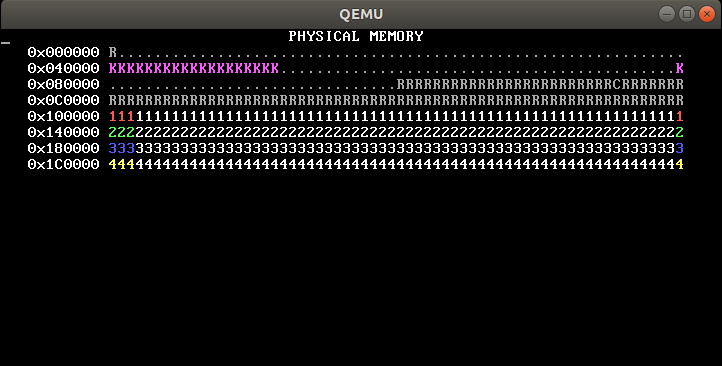 If you instead see WeensyOS crash with a scary error similar to the picture below, think about when the loop allocating pages needs to stop, and what could go wrong if it does not! 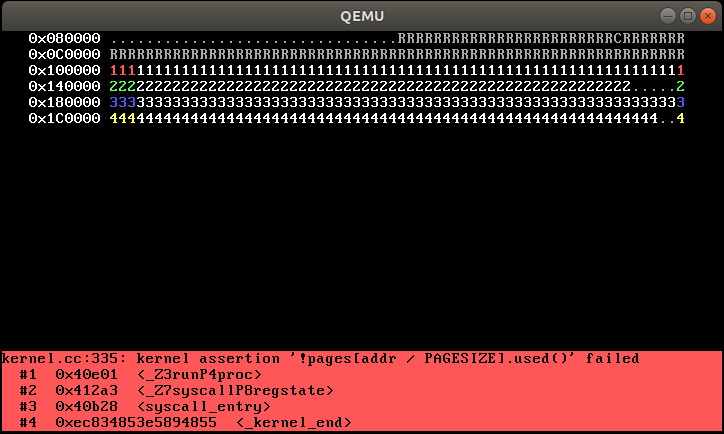 Now, once you’ve got this right, let’s figure out why some numbers are white. The processes asked for memory and the kernel allocated it, but they haven’t actually done anything with that memory. The white numbers indicate that there is no data in the first four bytes of the page (they are all zeros, as the kernel zeros the page when allocating it).

Task: Make your p-allocator.cc write the PID of the current process into the first four bytes of each page it allocates.

Now your output should be all colored: 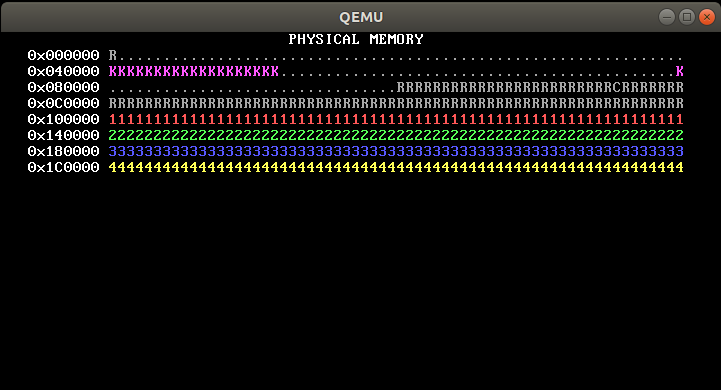 So far, the console is only showing you the physical memory. In the lab version of WeensyOS – as well as in the initial stencil for Project 3 – there is no isolation between processes. In other words, process 1 could totally trample all over the memory of the other processes! In Project 3, you’ll implement virtual memory to support better process isolation.

Virtual memory is the hardware mechanism that allows multiple processes on a computer to safely share physical memory. “Safely” here means that processes should not be able to write all over other processes’ memory – and that includes the kernel’s memory, as the kernel is also a process (with PID 0 in WeensyOS). You will have learned (or are soon about to learn) about virtual memory in lectures!

Task: In kernel.cc, edit the memshow function and change the value of show_virtual to 1 to display the virtual address space. Then run your WeensyOS.

Our current WeensyOS has no virtual memory at all. The bottom part of the console output cycles through the virtual memory view for your four processes in turn. Evidently, all processes see identical views of memory, and that view is exactly what’s in physical memory. Moreover, the characters in the virtual memory display are inverted, which indicates that the process is allowed to access the corresponding address. This implies that memory is not properly isolated: for example, all four processes can access the kernel memory (K), and process 1 can access process 2’s data (2)!

In Project 3, you will add memory isolation via virtual memory. To do so, you will give processes their own page tables, which translate virtual addresses (which the user-space processes use) into physical addresses (in RAM).

Many processors use multi-level page tables to perform translations. Specifically, x86-64 and WeensyOS have a four-level page table. Recall that each physical page is 212 (4096) bytes in size (= 4KB), and since each address is 64 bits (= 23), each page can contain 29 addresses.

We won’t go into the specifics of how exactly virtual address translation is performed here, and you do not need to know them for this lab and the project. But if you’re curious, definitely refer to lecture materials, research on your own, or ask the TAs!

WeensyOS abstracts the details of x86-64 page tables away from you, and instead gives you high-level interfaces for dealing with virtual memory and processing page tables: vmiter and ptiter, which are C++ iterators that allow you to conveniently loop over virtual memory mappings and page tables. The vmiter helps to iterate through pages in virtual memory, and lets you check the underlying, destination physical pages for properties like permissions and physical addresses. On the other hand, the ptiter helps you iterate through page table pages (yes, page tables are themselves stored in pages – it’s pages all the way down!).

We picked out some useful methods for vmiter to walk through together below (to see the full declaration and implementation of the interfaces, see k-vmiter.hh and k-vmiter.cc). There’s a couple of methods not mentioned here, but feel free to read about them on your own and use them wherever you see fit.

You can initialize a vmiter object by passing in either a process (in which case it will figure out the page table for that process), or an x86-64 page table. Here is an example that checks if the address 0x040000 is mapped in the kernel page tables (you can try this example somewhere in your kernel.cc!):

The vmiter(pt, (uintptr_t)0x040000) part creates a vmiter object that examines the virtual address 0x040000 in the page table pt. The pa() method on this object returns the corresponding physical address pa.

The vmiter can also find out the permission associated with the current page it is looking at. In x86-64.h, the following permission flags (bits) are defined:

The vmiter can then use the following functions to determine the permissions of the current page:

For example, this snippet of code checks if the va is present and writable (PTE_P | PTE_W) in pt:

You can also use vmiter with a for loop, calling methods that query its state and methods that change its current virtual address. For example, this loop prints all present mappings in the lower 64KiB of memory:

Note that this loop iterates one page at a time: the it += PAGESIZE expression increases it.va() by PAGESIZE.

The map() and try_map() methods are used to add mappings to a page table. They also allocate actual page table pages on demand (e.g., the second and third level page tables mentioned above). The key difference between try_map and map is that try_map returns -1 on failure, while map panics on failure. In Project 3, it’s up to you to decide which is appropriate to call! The following snippet maps virtual address 0x2000 to the physical address 0x3000 with all permissions in the page table pointed to by pt:

Task:
Now that you’re more familiar with how vmiter works, use vmiter to implement a function that copies virtual memory mappings from a source page table to a destination page table.

Then, head to the grading server. On the “Labs” page, use the “Lab 5 checkoff” button to check off your lab.

Note that the checkoff for this lab runs for almost a minute without producing output, as it runs your WeensyOS in the background. Don’t be alarmed if the checkoff script seems “stuck” – it will complete after about a minute and show you the results.