Computers often use a technique called caching to make a memory system comprised of a hierarchy of storage devices to appear as large and fast. In particular, when we build a cache, we use a small amount of relatively fast storage at one level of the memory hierarchy to speed up access to a large and relatively slow storage at the next lower level of the memory hierarchy. By “lower”, we mean further from the processor. 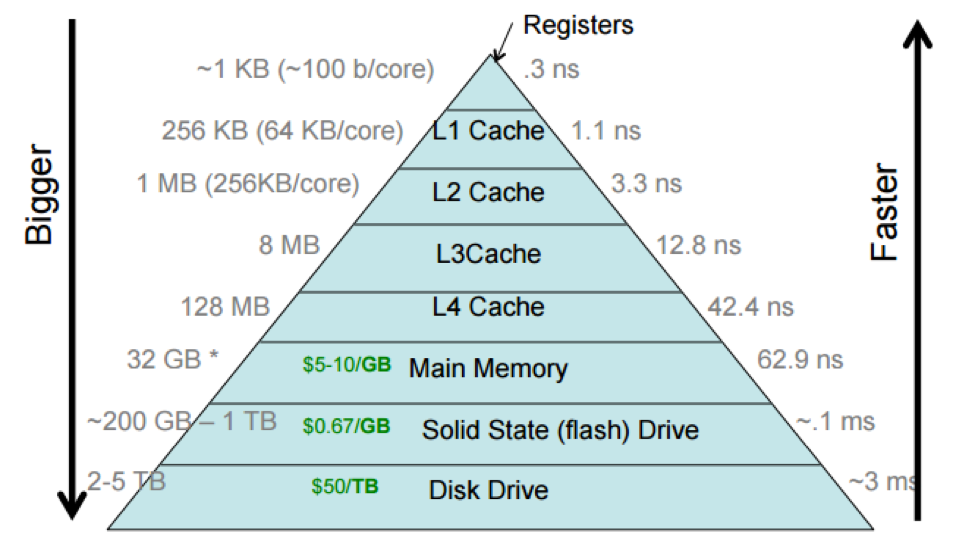 At the top of the memory hierarchy, the picture shows the processor cache divided into multiple levels, with the L1 cache (sometimes pronounced “level-one cache”) closer to the processor than the L4 cache. This reflects how processor caches actually work in practice (there really are 3-4 different caches in your processor!), but we often think of a processor cache as a single unit.

Different computers have different sizes and access costs for these hierarchy levels; the ones listed above are typical. For example, a common desktop computer with four cores (i.e., four independent processors) might have ~200 bytes of registers; ~9 MB of processor cache; 8 GB primary memory; 512 GB SSD; and 2 TB hard disk. The processor cache divides into three levels: e.g., there might be 128KB of L1 cache, divided into four 32KB components; 512KB of L2 cache, divided into two 256KB components (one per “socket”, or pair of cores); and 8MB of L3 cache shared by all cores.

And distributed systems have yet lower levels. For instance, Google and Facebook have petabytes or exabytes of data, distributed among many computers. You can think of this as another storage layer, networked storage, that is typically slower to access than any local storage.

Each layer in the storage hierarchy acts as a cache for the following layer.

How is caching used?

Caches are so critical to computer systems that it sometimes seems like caching is the only performance-improving idea in systems. Processors have caches for primary memory. The operating system uses most of primary memory as a cache for disks and other stable storage devices. Running programs reserve some of their private memory to cache the operating system’s cache of the disk.

Acknowledgements: This lab is based on exercises in Harvard’s CS61 and UC Berkeley’s CS61c courses, which we have reused with permission.

This will merge our Lab 4 stencil code with your previous work. If you have any “conflicts” from Lab 3, resolve them before continuing further. Run git push to save your work back to your personal repository.

Note: This lab contains both an autograded and a manually-graded portion, so the grading server checkoff button will only ever give you partial credit for this lab.

In this exercise, we’ll use simple I/O benchmark programs to evaluate the real-world impact of caches. Specifically, we’ll run several programs that write data to disk (to your computer’s hard drive). Each of these programs accomplish the same task of writing 5,120,000 bytes (5 MB) to a file called data, but they do so in several different ways.

Note: Your course VM does not have a real disk attached; instead, its disk is emulated by your computer. Therefore, it’s important that you run Exercise 1 on the department machines. The remaining exercises can run in your course VM.

You can clone your repo onto the department machines by ssh’ing or logging into a machine and running:

Synchronous writes one byte at a time

Take a look at w01-byte.c. Currently, w01-byte.c writes to a file called data:

“Synchronously” means that each write operation completes only when the data has made its way through all layers of caching mentioned above out to the true disk hardware. We request synchronous writes by opening the file with the O_SYNC option to open (line 5).

You can compile and run w01-byte.c by running:

Task: Run w01-byte and record how many bytes per second it can write. Write your answer into answers.md.

(This may take a few minutes. If this takes longer than 5 minutes, feel free to stop the program with Ctrl-C. You can still record the program’s bytes/second.)

You’ll notice that this is quite slow.

Asynchronous writes one byte at a time

We can optimize the previous program by removing the O_SYNC flag, so that the program requests “asynchronous” writes, and relies on the operating system to write the data to the disk when it’s convenient (but after your write call has returned).

You should notice that asynchronous program is ~1,500x faster than the synchronous one. (This may vary based on the machine you’re using.)

While this new asynchronous program is much faster, it’s still being slowed down by expensive operations – namely system calls. These operating system invocations are slow, because they require the processor to stop what it’s doing, save the user program’s state, give control to the operating system to perform a write or read call, and then switch back. (We’ll learn a lot more about system calls in the OS part of the course shortly!)

To get around this, we can use an additional layer of caching through library calls – function calls that are implemented in the standard library and keep their own cache. These functions avoid the cost of switching states to the operating system, because you’re writing to their in-memory cache rather than to the OS’s. By using the standard library call fwrite rather than the write system call, the program performs writes to a cache in program memory without involving the operating system.

Even though all three programs write one byte at a time, caching makes the fastest one write ~40,000x faster than the program we started with.

Exercise 2: How the Processor Cache Works

Now that you have a better idea why caching is so important, let’s get into how one particular, important kind of cache in your computer works. We will be looking at the processor cache, which is a fast piece of memory that the processor uses to be able to access data in memory more quickly. We already encountered the processor cache briefly when we talked about alignment in lectures!

Note that the idea behind caching is general and applies both to the I/O caching you explored in Exercise 1 and to the caching we will explore in this exercise. But the processor cache is actually a specific piece of hardware: it is part of the processor chip, and you could see if it you pried the chip open and put it under a microscope!

Your course VM is a virtual machine, which makes it difficult to get reliable cache statistics from it, as it shares the processor cache with other programs on your computer. For this exercise, we therefore use a cache simulator tool, called Venus, to visualize changes to the cache.

Caches have several hit, miss, and eviction policies, each with their own trade-offs. In the Venus simulator, you will use a write-through hit policy, a write-allocate miss policy, and an LRU eviction policy. We explain what these terms mean below!

This lab uses the cache.s file. This file contains assembly code in RISC-V assmebly, a an assembly language for a different architecture than the one you’ve worked with so far. You won’t need to understand how to read this assembly code, but if you’re curious about the differences between the x86-64 and RISC-V architectures, check out this post. Here is some C-like pseudocode for the assembly instructions in cache.s:

Lines 24-28 of cache.s allow us to set the arraysize, stepsize, repcount, and option variables. li is a RISC-V instruction to load a constant into a register. Currently:

Make sure you understand what the pseudocode does and how you can edit the variables before you proceed to analyze cache configurations on it.

Task: To get set up in Venus:

Simulate the following scenarios and record the final cache hit rates with the program in cache.s. You can find the cache hit rates in the “Cache” sidebar on the right hand side of the Simulator tab (you may have to scroll down a bit to see the “Hit Rate” row). Try to reason out what the hit rate will be before running the code. After running each simulation, make sure you understand why you see what you see!

Set these in the Cache section of the Simulator Tab.

Task: Now run the program, and answer these questions in answers.md.

(N.B.: Venus will throw an error if your number of blocks and block size is not a power of 2)

Hopefully, you realized in the last exercise that we can maximize our hit-rate by making the cache large enough to hold all of the contents of the array we’re accessing. In practice, it would be nice if we could store all of the contents of the memory that we’re accessing in the fastest possible storage, but like many things in life, we’re often limited by financial resources (rembember the memory hierarchy from lecture?). You can check how much space in bytes your machine is allocating for caching by typing getconf -a | grep CACHE or lscpu in your Virtual Machine.

If you recall, matrices are 2-dimensional data structures wherein each data element is accessed via two indices. To multiply two matrices, we can simply use 3 nested loops, assuming that matrices A, B, and C are all n-by-n and stored in one-dimensional column-major arrays (see below for an explanation of what these terms mean):

Note: In this exercise, the 2D matrix is flattened to a one-dimensional array. For example, if you had a 5x5 matrix, it would be a 25 element 1D array, where each row is consecutively laid out in memory. If you generally access the 2nd row and 3rd column of the 5x5 matrix called A using A[1][2] (since it’s 0 indexed), you’d access the equivalent entry of the 1D array called B with B[1*5 + 2].

In the above code, note that the loops are ordered i, j, k. If we examine the innermost loop (the one that increments k), we see that it…

Checkout matrixMultiply.c. You’ll notice that the file contains multiple implementations of matrix multiply with three nested loops. You can compile and run matrixMultiply.c by running:

While each of these implementations will correctly calcuate the matrix multiplication, the order in which we choose to access the elements of the matrices can have a large impact on performance. From the previous exercises, you should realize that caches perform better (more cache hits, fewer cache misses) when memory accesses take advantage of temporal locality (recently accessed blocks are accessed again) and spatial locality (nearby blocks are accessed soon), utilizing blocks already contained within our cache.

Task: Run the program a couple of times, order the functions from fastest to slowest, and explain why each function’s ranking makes sense using your understanding of how the cache works. Some functions might have similar runtimes. If this is the case, explain why.

Note: The unit “Gflops/s” reads, “Giga-floating-point-operations per second.” The bigger the number, the faster the program is running.

Then, head to the grading server. On the “Labs” page, use the “Lab 4 checkoff” button to check off your lab.

Note: For this lab, you will only receive partial credit from the checkoff button, so don’t panic if it says that you received a partial checkoff (everybody does).

The partial credit corresponds to exercise 1. We will grade the remainder of the lab manually, and your submission will be graded by TAs who will update your grade accordingly. Make sure your answers to the conceptual questions are in answers.md.